This year has been dedicated to the boom and downfall of virtual currencies. While most of the year was dominated by large cryptocurrencies like Bitcoin, Ethereum, and Litecoin, there were some digital assets that experienced sustainable and lucrative growth like Ripple and Verge (XVG). The rate of growth was different for each cryptocurrency but there was a common line of the trend observed which was fundamentally dominated by Bitcoin. If we divide the year 2017 into different quarters, the growth of Bitcoin was experienced exponentially but then the balloon burst eventually just before the Chrismas. Virtual currencies managed to gain the pace once again and moved above the bottom ceiling of $13000 mark.

Recently, the debacle of Bitcoin along with several other currencies led to the value depreciation of almost all the cryptocurrencies. There were some digital assets that became the outliers like Riddle and Verge (XVG). While Riddle managed to augment its price and capture the market capitalization of virtual currency market by more than 17.7 %, Verge (XVG)also survived the fickleness of financial markets. Verge is almost 136% above its initial introduction price which was initially equivalent to 257% just before the wrong speculations struck the market before Christmas. On 22nd Dec, Verge touched the lowest cap of around $0.07 but managed to bounce back gaining its lucrative flow. Just a week back, the volume traded of Verge astonished the market brokers with almost a rise of about 55%. The traded volume was equivalent to 499.40935 million US$. 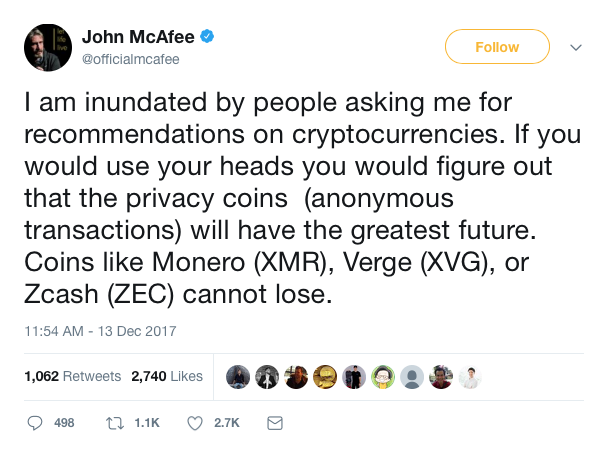 This particular flow of investors moving towards Verge came as a result of McAfee’s tweet which restored the confidence of people all across the globe in digital assets. Following the tweet of McAfee, the Verge (XVG) experienced a surge of about 800% in terms of trading. We have seen in recent times that the investors are particularly fearful about the element of unpredictability and instability concerned with Bitcoin and several other lucrative digital assets which are decentralized in nature. With Verge, this fear nearly ends because of its buffer and safety regarding asset backing and movement in terms of economic conditions of the globe without having the influence of speculations.

Another concern regarding Bitcoin and other digital assets have been the issue of privacy of transactions. It has been on record that Edward Snowden explicitly stated,

This is a particular issue because it will also direct the tax policy of the government and other such regulations. Verge (XVG) prices continue to augment as a result of “Wraith Protocol” release which is something, the investors are looking forward to for future trading in complete anonymity.

Many analysts are predicting that Verge (XVG) would soon cross the $1 mark if it continues to make such exponential growth.

Investing Shortcuts Bitcoin Guide The Beginner’s Guide to Bitcoin is a book that can educate one about the...
Business
January 12th, 2018

GM plans to release cars with no steering wheel in 2019.

Zuma spacecraft launched by SpaceX is lost after it was unable to reach orbit.