Golden Globe 2018, It was a night of passionate speeches, weird wins and lots of speeches about the current culture of Hollywood.It was the first major Hollywood awards ceremony since the film industry was hit by sexual harassment scandals, with stars wearing black to honor victims.The main focus of the night was on the current atmosphere in campaigns like Me Too and Time’s Up, which is focused on bringing a change for women not only in the entertainment industry but also around the world.

Many winners and presenters addressed the ongoing scandal – with host Seth Meyers setting the ton with his opening monologue. 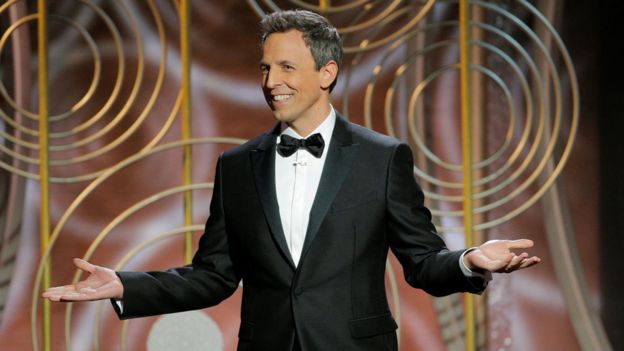 “There’s a new era underway and I can tell because it has been years since a white man has been this nervous in Hollywood,” he said.

“For the male nominees in the room, this is the first time in three months it won’t be terrifying to hear your name read out.”

In a joke directed at Harvey Weinstein, Meyers referred to the disgraced movie mogul as the “elephant, not in the room”.

“He’ll be back in 20 years when he’s the first person booed in the In Memoriam,” Meyers added, as the audience gasped in shock.

As the Golden Globes ceremony is the first award show to take place since the allegations of sexual misconduct began flooding Hollywood. Tasked with hosting the ceremony, host Seth Meyers joked he felt like “the first dog they shot into outer space”.

The limelight of the Golden Gold awards was Oprah Winfrey’s speech. In a momentous speech, Oprah Winfrey brought Hollywood to its feet as she called out Sexual harassers while being honored at the 75th Golden Globe awards in Los Angeles.

“I want all the girls watching to know that a new day is here on the horizon!” Winfrey chanted as the A-list audience jumped to its feet and cheered.

“And when that new day finally dawns, it will be because of a lot of magnificent women, many of whom are right here in this room tonight, and some pretty phenomenal men, fighting hard to make sure that they become the leaders who take us to the time when nobody ever has to say ‘me too’ again!”.

Oprah Winfrey was being honored with the  Cecil B. DeMille award her outstanding contribution to entertainment.

“What I know for sure is that speaking your truth is the most powerful tool we all have and I’m especially proud and inspired by all the women who have felt strong enough to stand up and share their personal stories,” she said.

“This year we became the story. But it’s not just a story affecting the entertainment industry. It’s one that transcends any culture, geography, race, religion, politics, or workplace. So I want tonight to express gratitude to all the women who have endured years of abuse or assault because of they, like my mother, had children to feed and bills to pay and dreams to pursue. They are the women whose names we’ll never know.”

Earlier in her speech, Winfrey acknowledged she’s the first black woman to be honored with the Cecil B. DeMille.

“It is not lost on me that, at this moment, there is some little girl watching as I become the first black woman to be given the same award,” Winfrey said. “It is an honor and it is a privilege to share the evening with all of them.”

In the first award of the night, Nicole Kidman picked up the awards for her role in the Big Little Lies.She took the stage with a message to her female co-stars: “This is ours to share. Wow, the power of women.This character that I played represents something that is the center of our conversation right now: abuse. I do believe, and I hope, we can elicit change through the stories we tell and the way we tell them. Let’s keep the conversation alive,”. She ended the speech by addressing her husband in the audience directly.“Keith Urban, when my cheek is against yours, everything melts away, and that is love. It’s true — I love you so much.”

Sam Rockwell won the award for the Best Performance by an Actor in a supporting role in any motion picture for his role in Three Billboards Outside Ebbing, Missouri.

Jennifer Aniston and TV icon Carol Burnett presented the award for the best actress in a TV series, Musical or Comedy— Aniston gushing over Burnett, and Burnett responding with a well-timed quip: “I’m glad you’re coming back to television … I loved Will & Grace.”Rachel Brosnahan took home the gong for The Marvellous Mrs. Maisel.

The “Roseanne” co-stars arrived together on the Globes stage to plug the upcoming reboot of the hit 1990’s sitcom and to present the award for the best TV drama series.

“Yeah,” Goodman acknowledged. “Not the kind you get awards for.”

“The Disaster’s Artist’s” James Franco won the best actor in a comedy for playing the role of Tommy Wiseau.When Wiseau arrived onstage, he attempted to take the microphone — but Franco cut him off. Sadly, we’ll never know the strangeness that could have taken place.

when u want to give credit, but not too much credit pic.twitter.com/tzR1Jep1ui

During Franco’s speech, the camera’s showed a rather stunned look on Hugh Jackman’s face, who was also one of the nominees for the award of Best Actor in a comedy.Fan’s were quick to notice the stars uncomfortable reaction.

Hugh Jackman is all of us listening to Franco’s acceptance speech. #GoldenGlobes pic.twitter.com/IE75evoOy5

Laura Dern won her fourth Golden Globe for her role in Big Little Lies and thanked her “family” of co-stars, Reese Witherspoon and Nicole Kidman.“May we teach our children that speaking out without fear of retribution is our cultures new north star,” she said, ending an impassioned acceptance speech.

Following Oprah Winfrey’s electric speech which saw the industry veteran call out sexual harassers, Frances McDormand acknowledged the “tectonic shift” that took place in the room at the ceremony.

“The women in this room tonight are not here for the food. We are here for the work,” McDormand said while accepting the award for Best Actress in a Motion Picture Drama for her role in Three Billboards Outside Ebbing, Missouri.It was a big night for the film, which picked up four of the six awards it was nominated for — including the final gong for the night, Best Motion Picture Drama.The film beat out Call Me By Your Name which was a favorite to win in the lead up to the ceremony. Nominated for three awards, the coming-of-age romance missed out on a win.

Best Performance by an Actress In A Television Series — Drama

Best Performance by an Actor in a Television Series — Drama

Sterling K. Brown, This Is Us

Best Performance by an Actress in a Supporting Role in a Series, Limited Series or Motion Picture Made for Television

Best Limited Series or Motion Picture Made for Television

Aziz Ansari, Master of None

Alexandre Desplat, The Shape of Water

This Is Me — The Greatest Showman

Best Performance by an Actor in a Motion Picture – Drama

Best Performance by an Actress in a Motion Picture – Drama

'Get Out' wins the best picture at Capri Hollywood Film Festival.